Chris and Jane Go To Saratoga Springs (That’s in New York. Not Florida.)

Just be clear, we went to Saratoga. Not Sarasota. Which is, unfortunately, what I mentioned to our friend Jimmy who used to live in Sarasota. Jim was so excited for us that he wrote back a long email filled with suggestions of places to visit. Top on that list for me would have been the 10th floor window of the County Administration Building (AKA his former office). Oh well, some other time perhaps. And, thanks again Jim. Really sorry about that.

In any case, here are some photos I took of our recent journey to upstate New York.

First, there was this dog who reminded me of our niece Enzo. Very cute dog. It was rainy drive but it wasn’t a long drive by Iowa standards.

And this is the view from our room. As I’ve already mentioned to some of you, that “Farmers Market” sign is a Pokéstop. So, that was cool. Honestly, how does anyone get anything done in their life when they live so close to a Pokéstop? It was an endless supply of ‘mons, ammo and battery for my cell phone. I really got wrapped up in that stupid game. 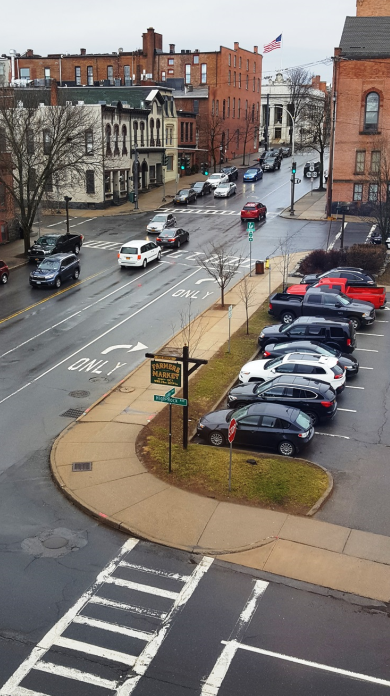 And, because Saratoga is such a tourist mecca in mid-April, Chris was able to score us a King Suite for literally ten bucks more than the conference rate. The room was big, I’ll give it that, but it seemed as if it were missing some of its furniture. It was sparse. 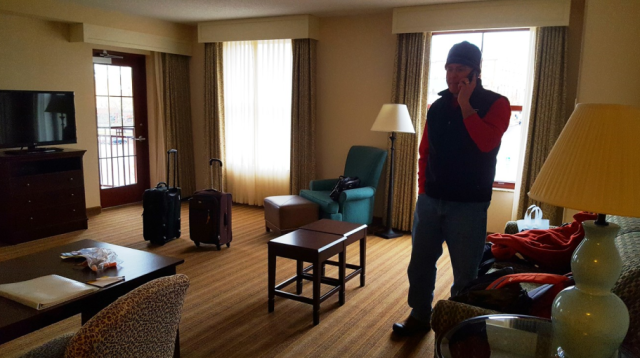 And here is Chris trying to read the on-screen channel guide on the TV. Fortunately, I’d thought to bring the binoculars.

Anyway, enough about the room. It was fun and lovely. And if it had been warmer we probably would have sat on its balcony.

Here’s a view of a couple of old hotels along the main drag. The city is not big. It might be about the size of Northampton.

Did I mention the cold? It flurried on and off the entire time we were there. And it was windy. But, better than rain or drizzle I guess.

In 1832, the springs and spas garnered so many visitors that the town got a train stop. And in 1847 Saratoga hosted the New York State Fair. Enter horse racing. 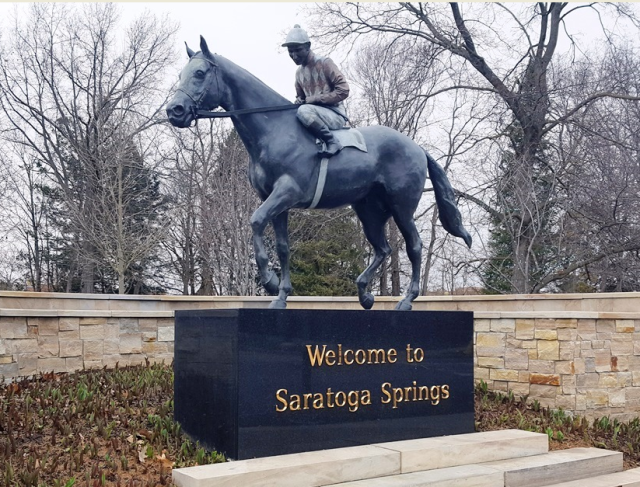 Saratoga had lots of references to horse racing, stuff to buy, things to see, but I just couldn’t get myself to care. Everything about horse racing seems sketchy to me. I mean, even the jockey doesn’t look happy. 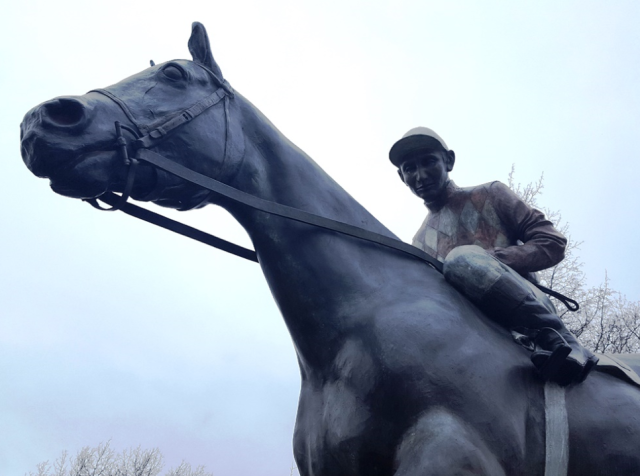 Anyway, moving on, what does horse racing begat? Why, gambling, of course. Cue the casino. Again, it was just really hard for me to give a damn. This is the first casino built in Saratoga and it is now a museum but I didn’t go in. Maybe I would have if it had been raining but it wasn’t raining. (BTW, the casino is now also a Pokégym.)

An aside – these pictures I found of the museum remind me of the diorama set up in Old Man Twickum’s House in Gilmore Girls episode “To Live and Let Diorama.” Tempting as that was – still not enticement enough to go inside.

I did like the dogs though; a couple of Dachshunds resting on either side of the steps. The breed seems an unusual choice.

This particular spring was interesting. So much so that I walked back to it with Chris in order to share. The water here is described as, “a highly-carbonated water of an Alkaline-Saline flavor noted for its high mineral content and renowned as a digestive curative.”

It sure was bubbly. I’ll give it that. It sputtered out of those taps. But I think I’d have to be feeling pretty ill in order to consider it a cure to anything. I mean, it stank like rotten eggs.

And back to the hotel. We stopped along the way and bought Thai food for dinner. Have I mentioned the weather?

Oh and speaking of cold weather – here’s a bonus photo of me playing Pokémon on Community Day here in the Woo. That’s me in the yellow shoes.

I had fun. I caught lots of “sheep.” But I think best of all is that I had an excuse to wear that hat out in public. Normally, I only wear it when I’m shoveling the driveway.

And that’s it everybody!

I ordered two egg sacs of praying mantises today because, in theory, spring is right around the corner, the tomato plants will arrive and bugs will begin to fill the garden. : )

“You want to talk to the cat?” is something I’m always tempted to ask whenever telemarketers call but usually I just bark, "Code word, please!"
View all posts by Uschi Kneeface →
This entry was posted in Uncategorized. Bookmark the permalink.

5 Responses to Chris and Jane Go To Saratoga Springs (That’s in New York. Not Florida.)